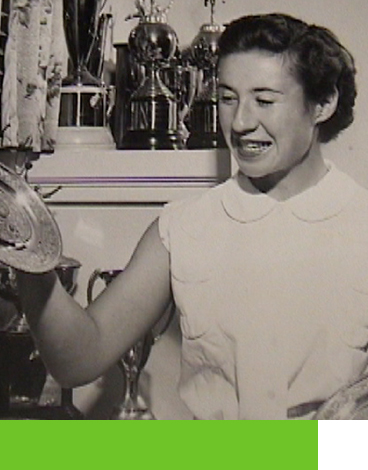 One of America's greatest tennis players has announced she is retiring from the sport after a horseback riding accident.

She has won the women's title at Wimbledon for the past three consecutive years, in 1952, 1953 and 1954. At 16, she became the youngest woman player to win the US national singles.

In 1953 she became the first woman tennis player ever to complete the Grand Slam, taking the US National Women's title at Forest Springs, New York to add to her Wimbledon, French and Australian open titles.

Last July (1954), she broke her leg in a horse riding accident just a few weeks before she was due to defend her US title. Although she planned to return to tennis, she has recently realised she will never regain her previous form. Maureen Connolly's tennis career began at the age of 10 on the municipal courts of San Diego. Her first coach Wilbur Folsom encouraged her to switch from left-handed to right and she soon became a baseline specialist with an especially strong backhand.

She earned her nickname "Little Mo" from the sportswriters who likened her explosiveness on court to the battleship USS Missouri, known as "Big Mo", which was based in her home town.

She later became a student of Eleanor "Teach" Tennant, a famous and demanding coach, who attempted to develop her competitive instinct by encouraging her to hate her opponents.

Her announcement today comes as she has revealed plans to get married. Her fiancé is Norman Brinker, a US Navy officer and former member of the US Olympic equestrian team.

She plans to take up sports writing for a San Diego newspaper and will also continue to play a role as a tennis coach.